By Edwin Gonzalez
Posted June 25, 2018
In Fine Art
Scott Listfield’s Paintings of an Astronaut in an Apocalyptic Silicon Valley2018-06-252018-07-02https://www.edgonzalez.me/wp-content/uploads/2017/10/portfolio-logo-old.pngEd Gonzalezhttps://www.edgonzalez.me/wp-content/uploads/2018/06/scott-listfield-astronaut-painting-silicon-valley-featured.jpg200px200px
0

Scott Listfield is a painter known for inserting an astronaut lost in a landscape cluttered with pop culture icons, corporate logos, and tongue-in-cheek science fiction reference. His biggest source of inspiration comes from 2001: A Space Oddysey, where he often wonders if people who viewed the movie during it’s release actually believed that we would have the technology present in the movie. With his work, “The astronaut in my paintings is simply here to explore the present.”

Scoot recently released a new series that features the same astronaut wandering a devoid Silicon Valley with nothing left but drones, robots and self-driving vehicles. As stated by Scott:

We ride in self-driving cars, algorithms quietly cataloguing our movements and opinions. We hold a conversation with our watch, our refrigerator, or the glowing orb that lives in our house and orders toilet paper when we start to run out. A robot delivers us a fresh pizza in under half an hour. Elon Musk launched an electric car into space for no apparent reason, and there is an actual nutritional product called Soylent. What future is this that we have crafted for ourselves?

Scott explores what Silicon Valley (and the rest of the world for that matter) would potentially look like if the human race disappeared and all that were left were autonomous robots, created to serve a single purpose for us. Here are some paintings from this series: 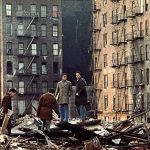 New York’s Lower East Side From The 1970s and 80sHistory, Photography 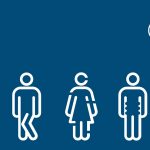