I feel bad that I have not updated in so long. Having a full-time job has made it rather difficult. But I cannot use that an excuse. Blogging is important to me as a person and designer.

Anyway, I got to see Milton Glaser at FIT. Seriously a dream come true. Without a doubt, pretty much every design student is familiar with his work. So I feel like it is unnecessary to rehash what is already known. He did, however, have some incredible knowledge about his belief in design, art and life. His discussion began with art and how it relates to the world, drawing specifically:

This blew my mind even though it is so simple. But it makes so much sense. By taking a three dimensional object/world and representing it on a two dimensional plane, one is already abstracting the world we live in. One could argue that every medium of art is abstraction in one way or another. However, I’m not sure if I could say the same about photography and video. But, it is still a three-dimensional world represented on a two-dimensional surface.

Later on in the lecture, Milton quoted Einstein (though I cannot remember why, I should have wrote that down). Having to do with time, he said:

The only reason for time is so that everything doesn’t happen at once.

I have this incredible fascination with space, blackholes, where we come from and time. In regards to time, I often wonder how time travel could possibly work. I remember watching a special on the History Channel and a theory of time travel was proposed. Essentially, one could travel around the earth at just below the speed of light for two weeks. Two weeks would pass for the traveler, but on the planet, let’s say twenty years would pass. That theory makes absolutely no sense to me. I just feel like that person would travel for two weeks at that speed and that’s it. When I heard this quote, it made me think that time is truly man-made. Yes, we can look to sky and see stars that are not even there anymore. We may be looking into the past, but it doesn’t mean we can actually be in the past, could we? Sorry for the rant and philosophical and scientific debate :).

This last quote is my favorite from the lecture. I hope it can sort of help non-designers understand graphic design on a much broader sense and it’s purpose:

I’ll leave you with this. The activity if design isn’t trivial or decorative or a way of selling things to people. It is a profound way of affecting the human condition and none of us should take that lightly.

What more needs to be said about that? 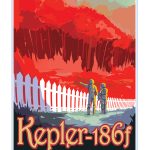